Many pitching coaches teach young players to either stay “tall and fall” or push as hard off the mound as they can when delivering a pitch to home plate. Is one method more optimal than the other?

If you want to throw hard, you must be able to produce force into the ground that will propel you in a forward direction towards home plate. The linear momentum that is created contributes to rotation of the trunk before ball release.

These movement sequences have been studied before in college-aged pitchers, and previous research has shown that college pitchers threw hardest when producing a high amount of force into the mound.

However, these same sequences have not been studied in the high school population.

A recent study looked at the role of push off and ground reaction force during the throwing motion on throwing velocity in high school aged pitchers.

Of the 52 pitchers that were analyzed, the results showed a significant relationship between ball speed and ground reaction force.

During the push off, horizontal ground reaction force reached around half the body weight of the player, which previous research has shown greater metrics in collegiate pitchers. While there was a statistically significant correlation between push off force and ball speed, it was weakly correlated.

These results tell us that high school aged pitchers are not utilizing their lower half when producing a pitch to home plate.

While the weak relationship may be due to poor hip musculature and general strength, poor motor control of the trunk, and lack of movement awareness, it may also indicate that while push off force is important, factors such as height, weight, and physical maturity are more important for high school aged pitchers.

As a rule of thumb, if you want to throw hard and be successful on the mound, focus on these key variables:

The relationship between the push off ground reaction force and ball speed in high school aged pitchers.

Baseball pitching is a sequential movement that requires transfer of momentum from the lower extremity to the throwing arm. Therefore, the ground reaction force (GRF) during push off is suggested to play a role in production of ball speed. The purpose of this study was to investigate the correlation between GRF characteristics during push off and ball speed in high school baseball pitchers. A total of 52 pitchers performed fast pitches from an indoor pitching mound. A force plate embedded in an indoor mound was used to capture the push off GRF. The GRF characteristics (peak anterior, vertical, and resultant forces, vertical and resultant forces at the time of peak anterior GRF, and impulse produced by the anterior GRF) from the three fastest strike pitches from each pitcher were used for analyses. Spearman’s rank correlation coefficients were used to describe the relationships between ball speed and the GRF characteristics. Ball speed was only weakly correlated with peak resultant force (r=.32, p=.02), and vertical (r=.45, p<.001) and resultant (r=.42, p=.002) forces at the time of peak anterior force. The ball speed was not correlated with other variables. The correlation between ball speed and push off force in high school pitchers was weak, especially when compared to what was reported for adult pitchers in other studies. Unlike for adult pitchers, higher push off force is only weakly correlated with ball velocity in high school pitchers, which suggests that training to better utilize body momentum may help high school pitchers improve ball speed. 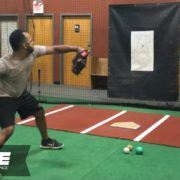